After our hugely successful involvement with the Canal and Rivers Trust’s ‘Stratford 2 Stratford‘ project, here is Part 2 of our look back of a great few days. 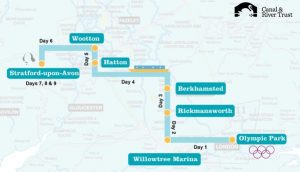 The Weekend
We could not have had a better mooring.
We were on the opposite bank of the river to the Royal Shakespeare Company (RSC) Theatre and right by a water point.  Our boats, Lancelot and Guinevere were on the inside (good position for publicity), with the other boats in support, Pennine and Chiltern breasted up to them and then Wenlock and Laughton on the outside of them.  Our stall site was less than 50 metres from the boats.
Friday was a very easy day for us, we needed it after all of the lock work in very hot weather!

The students went into town and visited Shakespeare’s birthplace where they were allowed to perform some short extracts of the play in the garden.

On the Saturday morning we completed putting the stand together.  It was manned by a rota of all LNBP people who were still on site, led by Peter Page who had originally hoped to meet us at Hatton but was prevented from doing so by a trapped nerve in his back.  There seemed to be some real interest in what we had to offer to community groups and a number of useful contacts were made.

During our stay at Stratford the boats were visited by Tony Hales, the Chairman of Canal and Rivers Trust (CRT), who thanked us profusely for the support we were giving. A somewhat nervous Mike was interviewed live on local radio and talked about LNBP and our involvement in the Stratford project, and also about LNBP’s aims and objectives.

On the Saturday afternoon 7 of us attended a performance of A Mid Summers Night’s Dream given by the students and we enjoyed it very much. They had learnt their parts, etc. in just one week whilst by travelling the canals from teaching given by ‘The Rubbish Shakespeare Company’.  Their performance was really entertaining and supported by some extremely accomplished acting. Throughout the journey and weekend the TV crew were filming the students.


Clips of these films can be viewed on You Tube under the heading Stratford 2 Stratford. The TV crew also generously promised to make a short video clip for LNBP to post on their web-site. A number of LNBP staff were interviewed and we look forwards to receipt of the film shortly.

Lights-Camera-Action!
Brian on camera being interviewed

The highlight of Saturday evening was a really good firework display.

Time for a well-earned drink!

The Return
Only 5 boats now as UCC had arranged the collection and return of Laughton so that it was back in Braunston to go out on hire on the following Tuesday.

We set off about midday on Sunday and moored at Wooton Wawen for the night.  The following day we got to the top of the Hatton flight but had difficulty getting through one of the locks where there was an underwater obstruction.  Chiltern had to be pulled out backwards and then driven into the lock at speed.  Wenlock got completely jammed and the final solution was one boat towing and another pushing.  It did show how we could deal with a difficult situation and work as a team.  We found out later that the problem had been reported to CRT at least the day before.

Our thanks go to everybody who contributed to the success of this project, with apologies to anyone who may have inadvertently been omitted below.
We could not have succeeded without the fantastic help and support of you all.
Skippers & Crew: Mike Wilton-Caley, Wayne Fletcher, Graham Hetherington, Paul & Denise Iverson, Nigel Smith, John Moore, Brian Eaton, Mike Horsley, John & Linda Driver, Chris & Di Woodward, Elliot & Paul.
Extra crew on return journey: Megan & Amy Smith, Julie Unwin and friends Mel, Gary, Chris & Ross.
Other helpers: Nick & Karen Weatherburn, Peter Page, Paul Johnson, Brendan Aegenheister.
By lnbp-new|2015-07-28T11:00:43+01:0028 July 2015|Events, News|0 Comments